The Quito City Tour with its live commentary in Spanish and English was a great backdrop as we drove through the downtown districts of La Mariscal (country homes of the rich in the 19th Century, now full of restaurants and bars), Americas in the Old Town (so named for the streets named for American cities and countries).

Our bus ride up to the 41-metre tall statue of La Virgen de Quito (complete with a crown of stars, angel wings and a chained dragon) at Mirador el Panecillo, involved our double-deck bus having to do a slight reverse and a sharp right onto oncoming traffic to go up the hill. There were houses on the hillside with corrugated iron walls and an outdoor laundry room.

From Mirador el Panecillo, the viewing platform gave a spectacular view of the city especially the old town. La Virgen de Quito is one of the largest aluminium statues in the world it made for a beautiful and towering backdrop.

As we made our way through the old town (particularly on Calle Paseo De la 24 de Mayo and Calle de La Muralla de San Francisco), we were caught in a traffic jam for the next 45 minutes. It was a great opportunity to observe how people live, a large range of items could be done purchased without leaving the footpath with fruit (cherries, grapes, watermelons and papayas), snacks (sweet rice balls, empanadas, nuts with lime and chilli), ice cream vendors with push-carts (who churned by hand and kept cool using large blocks). One-piece monkey suits, tracksuits, keys and cigarettes, clothes and footballs were all on offer.

The residents of the Old Town had a variety of uses for their narrow balconies including a garden of flowering plants, yard for a small dog to run around, balcony for the grandchild to watch the traffic jam go past and a way to get into the Christmas spirit.

The cause of the traffic jam was the last day of school before Christmas, with each child leaving with a free lunch courtesy of the school, some of which was eaten at the school gate.

We had a traditional Ecuadorian lunch at Mama Clorinda.

Basilica del Voto Nacional (Iglesia La Basilica), a huge Gothic church visible from El Panecillo (lookout); it has beautiful stained glass and a highly decorated chapel which was closed. The exterior of the church is decorated with turtles, iguanas, monkeys and pelicans. 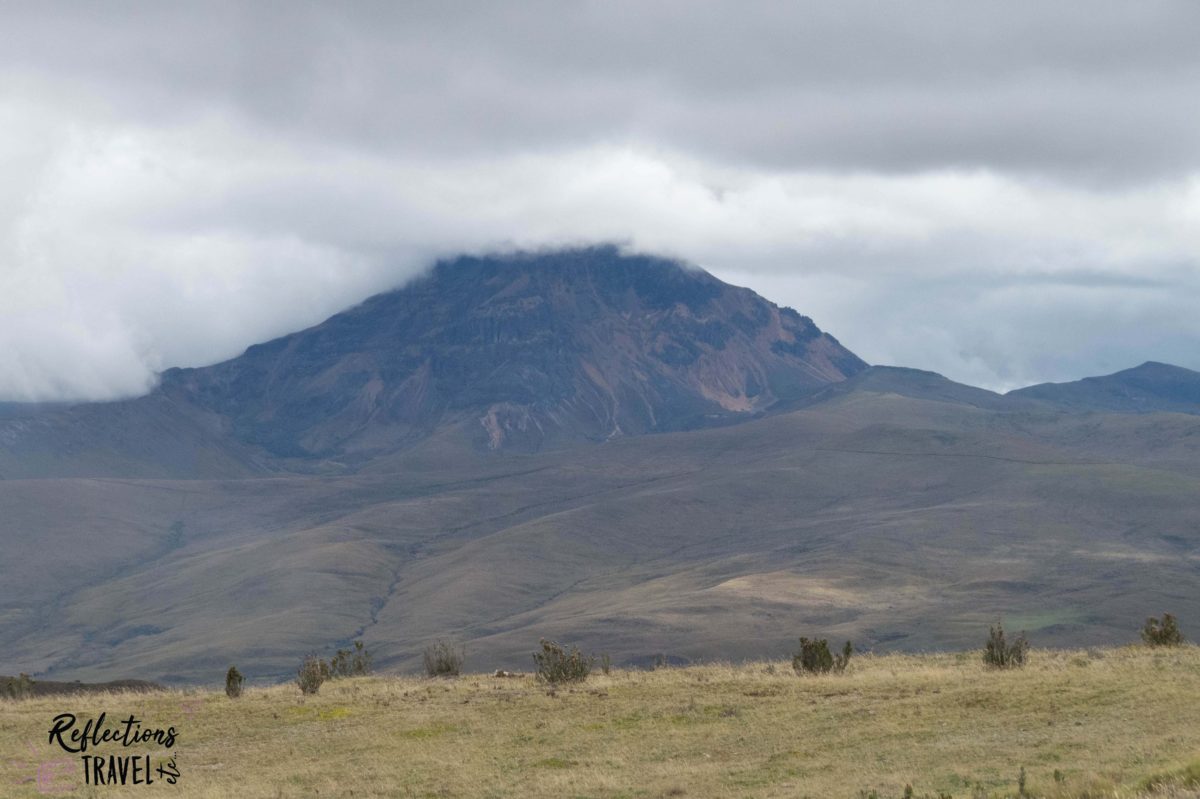 Cotopaxi is an active stratovolcano in the Andes Mountains, located in the Latacunga canton of Cotopaxi Province, about 50 km (31 miles) south of Quito, Ecuador. On a clear day, Cotopaxi is visible on the skyline from Quito. It is the second-highest summit in Ecuador, reaching a height of 5,897 m (19,347 ft), it is one of the world’s highest volcanoes and is part of the chain of volcanoes around the Pacific plate known as the Pacific Ring of Fire.

Cotopaxi has an almost symmetrical cone that rises from a highland plain of about 3,800 m (12,470 ft), with a width at its base of about 23 km (14 mi). Although situated at the equator, it is one of the few mountains with a glacier, which starts at 5,000 m (16,400 ft). According to local Quechua language, “coto” means moon and “paxi” means neck. The mountain was honoured as a “Sacred Mountain” by local Andean people, even before the Inca invasion in the 15th century.

Since 1738, Cotopaxi has erupted more than 50 times, resulting in the creation of numerous valleys formed by lahars (mudflows) around the volcano. The last eruption lasted from August 2015 to January 2016, re-opening to climbers in October 2017.

Getting from Quito to Cotopaxi

Our journey from Quito, started with a 7 am meeting when our driver and guide checked that we had enough warm clothing as had seen snow a couple of days before on the mountain. Using the tried and tested method of layering, I managed to put together two t-shirts, a long sleeve shirt, a light puffy jacket, Gortex and a scarf (aka a beach sarong) for the hike up.

Unlike London or Sydney, it wasn’t the peak hour traffic across town that was the problem rather the traffic jam leaving the city which caused the gridlock; there were countless buses (they are in the process of building the metro system) and people were changing buses in the middle of intersections.

From the national park entrance to the car park of Volcán Cotopaxi, it was a 7 km long winding and the partially paved road ended at 4,600 m (above sea level); from there the walk would continue on foot. Taking into consideration the lack of altitude hiking and equipment, reaching the summit was never a realistic objective for that day. My goal for the day was the Refugio José Rivas which at 4,864 m (above sea level); which is the point from which hikers start off at midnight to reach the summit for sunrise.

With my only previous experience of hiking at altitude being Macchu Picchu where I was able to acclimatise to being at altitude over a couple of weeks; the hike up to Refugio after being at altitude for less than 24 hours was always going to be a stretch. Although we tried to counteract some of the effects of the altitude with Diamox about 36 hours before it definitely was not enough.

The journey towards the Refugio was a slow and careful one, the recent (2015/16) volcanic eruption deposited a lot of loose rock, which meant that for each step up; you would slide back a couple of centimetres. Using the same method that had got me through the Inca trail, I would count out 50 steps and steps before allowing myself to stop; and would be overtaken by mountain bikers who were hiking with their bike in one hand. I also met a group of Ecuadorians who were practising for a summit in 6 weeks and had already run/hiked from the lake about 2 hours away and several hundred metres in altitude without water and in gym wear (rather than hiking wear).

Although I didn’t reach the Refugio, I probably got about 2/3 of the way up from the carpark, so probably just under 4,800 m (above sea level) and it was the highest altitude that I have ever been! There was still a magnificent view of the snow-covered top of Cotopaxi. I will have to make it back and attempt the climb with more preparation and the right gear!

A 30-minute drive down the mountain to Laguna de Limpiopungo (3,800 m above sea level), was a great way to properly see Volcán Cotopaxi in context; the shifting clouds made it quite tricky to get a decent picture. The lake itself was calm with wildflowers and birdlife just off the paths and mercifully free of other tourists and hikers.

Lunch at La Posada del Chagra in Machachi; a traditional Ecuadorian restaurant was a definite highlight. My first course was a traditional potato soup with pig organs garnished with dried pig’s blood, avocado, tomato and onion topped off with a homemade hot sauce. While the main course was pork with smashed potato, fried plantain, large white corn and pork crackling.

In sharp contrast was dinner, where we carried on with the Ecuadorian theme but this time ended up with a “Caesar Salad” with lettuce, grated plastic cheese, half a slice of bread and what tasted like a cup of cheap white vinegar (definitely not vinaigrette dressing).